A Short Guide to 15 Most Popular Types of Coffee
14 Coffee Mugs Worth Money
Roasted Coffee vs Instant Coffee
What Are The Main Types of Coffee Beans? A Guide
Tea vs Coffee for Weight Loss: What’s the Best?

Coffee vs Matcha: Which is Better?

Among the possible morning beverage choices, coffee ranks at the top of the list for many Americans.

While coffee is popular, another common drink is matcha.

Matcha is a special type of green tea that is made by taking young tea leaves, grinding them into a green powder, and whisking them together with hot water.

With matcha rising in popularity, which is better when looking at coffee vs matcha? In the end, coffee comes out on top; however, it is important to look at the details of the comparison closely.

An Overview of Coffee vs Matcha

Traditionally, coffee has been one of the most popular drinks in the world; however, matcha has become a popular beverage for many people as well.

Coffee has a long history and comes in numerous varieties ranging from a standard brew to mochas, macchiatos, cappuccinos, espressos, and everything in between.

In addition to helping people wake up in the morning, coffee could also help with weight loss while also preventing the development of a number of chronic health conditions.

On the other hand, matcha is a popular choice. It could help with skin complexion, weight loss, and mental acuity. Therefore, it is important to look at both the benefits and drawbacks of each drink before making a decision.

Coffee is loved by countless people who depend on it to not only get them up in the morning but also for their social lives. Of course, the biggest benefit of coffee is that it contains caffeine, which can sometimes help you overcome fatigue.

Caffeine keeps people awake by blocking adenosine receptors (which would otherwise make people tired) and by increasing dopamine levels (which help people feel energized). Some of the other key benefits of drinking coffee include:

While these benefits are important, there are several drawbacks to drinking coffee regularly as well. These include:

These are a few of the key drawbacks of drinking coffee. Therefore, everyone has to weight the benefits and drawbacks of coffee carefully.

The Benefits of Matcha 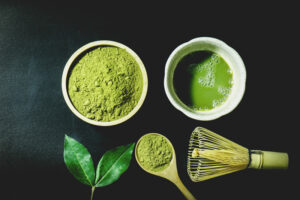 Matcha green tea has become a popular alternative to coffee. There are several health benefits of matcha to keep in mind.

In addition to containing caffeine, which helps people stay awake, some of the other health benefits include:

While these benefits are great, there are several drawbacks as well. These include:

While many people enjoy matcha green tea, it should be enjoyed in moderation.

The Final Word on Coffee vs Matcha

In the end, the comparison between coffee and matcha is close; however, coffee still comes out on top. In addition to being more popular, the health benefits of coffee simply outweigh the benefits and drawbacks of matcha. At the same time, the right drink for one person might not be right for someone else. Therefore, everyone should take a look at coffee and matcha, try them both, and see which one they like.

A Short Guide to 15 Most Popular Types of Coffee

What Are The Main Types of Coffee Beans? A Guide

How to Roast Coffee Beans at Home: A Simple 6-Step DIY Guide